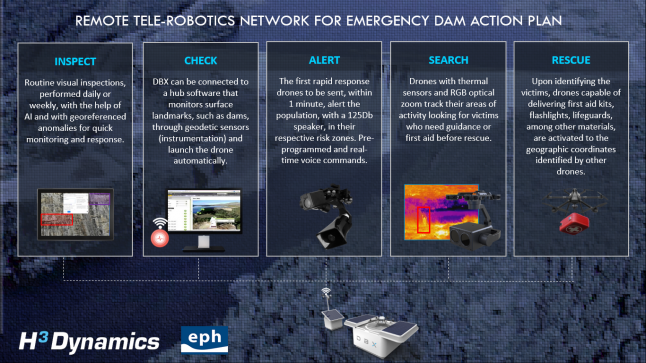 Brazil
Market: Internet and IT, Insurance, Robotics, Drones, Artificial Intelligence
Stage of the project: Prototype or product is ready

Date of last change: 14.06.2020
Startup.NetworkStartups and Investment ProjectsH3 DYNAMICS
Rating
equalizer from 2000
help
Calculated and estimated occupancy of the project (more about ratings)
My rating

The REMOTE TELE-ROBOTICS NETWORK FOR EMERGENCY DAM ACTION PLAN consists of a network of multi-purpose and collaborative aerial drone shelters installed near and downstream from dam sites, ready to deploy at a minute’s notice to perform a sequence of first-response actions (ALERT, SEARCH, RESCUE), as well as preventative actions (INSPECT & CHECK). Such systems can be deployed at all at-risk dam sites in Brazil and be connected to civil defense command centers if desired.

The tele-robotics drone base station is ready for the market, but the whole concept of applications for emergency fast response and inspection for dams needs some investment for proof of concept projects to be validated.

We are seeking dam owners from hydropower and mining sectors. In Brazil, there 24,092 dams registered by the regulatory agencies. 13,997 have some kind of authorization Act (grant, concession, authorization, license, among others) and 5,079 dams submit to the PNSB – DAM Emergency Plan. And more than 900 are classified as high potential associated damage and 600 as high and medium risk to collapse.
In the world, a survey from ICOLD for dams with heights of 15 metres or greater, or a dam between the 5 metres and 15 metres which more than 3 million of m³, there are a total of 58,324 dams.

Dam owners for mining tailings as well as hydroelectrics have been under pressure from the authorities to implement strict monitoring actions for high-risk dams, as well as to implement efficient communication and management solutions in emergency action plans for dams. In Brazil, recently two major dam breaks led to the death of more than 300 people and one of the country's biggest environmental disasters. In Brazil, more than dams submit to the PNSB – National DAM Emergency Plan. So as a consequence, some resolutions by authorities were developed such as the one from National Mining Agency resolution (Brazil) that says: ...”The entrepreneur responsible for the mining dam inserted in the National Dam Safety Plan with High Associated Potential DAMAGE, must implement, by December 15, 2020, an automated instrumentation monitoring system with real-time and full-time monitoring, following the defined criteria by the designer “......”The automatic and manual activation warning systems must be designed and implemented in accordance with the characteristics of the dam and with the activation criteria related to deformation and displacement parameters, whose limits must be defined by the dam designer”....
So mining companies are looking for solutions can help to alert populations as a redundancy to traditional sirens as well as be more efficient in some locations. And as most mining dams will need to have sensors monitoring the dams, our REMOTE TELE-ROBOTICS NETWORK FOR EMERGENCY DAM ACTION PLAN can be connected to such sensors to activate the drone for the emergency missions or to check the drone depending on the level of alert.

The TELE-ROBOTICS SAFETY NETWORK FOR DAM EMERGENCY ACTION PLAN (EAP) consists of a network of multi-purpose and collaborative aerial drone shelters installed near and downstream fr om dam sites, ready to deploy at a minute’s notice to perform a sequence of first-response actions (ALERT, SEARCH, RESCUE), as well as preventative actions (INSPECT & CHECK). Such systems can be deployed at all at-risk dam sites in Brazil and be connected to civil defense command centers if desired.
In responsive missions, the tele-robotics drone network performs first response missions in emergency situations. Stations are installed strategically in their respective self-rescue zones to serve the critical first to forty critical minutes of the EAP.
The IP65 rated robotic shelter systems control autonomously the full operation of drones, with the possibility for manual control fr om a command center. These include communication routers, VSAT options, off-grid energy storage, a weather station. The drone shelter systems connect to the dam monitoring centers, connect to dam sensors and measurement devices. Depending on payloads integrated, drones can be activated and work together to perform population alert, search and delivery missions, according to the missions pre-assigned to each drone.
Reactive first response missions:
Alert: The first rapid response drones are sent to alert the population in their respective risk zones with pre-programmed flight plans. An inspection unit is meanwhile sent to the dam according to the location of the instrumentation sensor that generated the alarm for abnormality characterization mission.
Drones with visualization sensors, combined with 125dB loudspeakers, selectively alert by siren or voice commands in each auto-rescue zone and guide the population on escape routes to reach their respective meeting points. Some drones go directly to the most critical homes where communication with residents by cell or landline is absent or has limited quality.
Search: Other robotic shelters are activated so that thermal sensor and RGB optical zoom drones track their respective areas looking for victims who need guidance or help. The information is transmitted in real time to the Civil Defense and to the company / dam command center.
Rescue: When identifying the victims, drones with speakers and capable of delivering first aid kits, flashlights, lifeguards, among other materials, are activated to the geographical coordinates identified by other drones. After the missions, the drones return to their tele-robotic shelters, land with precision, automatically recharge the batteries - waiting for their next missions. In addition to the application in a real emergency situation, the system can be used in simulations and testing with the local community.
Preventive missions for feeding intelligence to reactive and fast response missions
Inspect: One of the drone shelter systems is dedicated to perform preventive missions, wh ere routine visual inspections are carried out daily or weekly. After the missions, our prioprietary AI / computer vision technology is applied to the collected images to help identify and map anomalies across the structure. An expert civil engineer can remotely validate the findingso that a complete digital inspection report can be generated to assist in decision making, such as corrective actions, as well as to help generate specific mission plans for quick inspection and response.
Check: The DBX tele-robotics shelter for drones can also be connected to software that monitors surface landmarks through geodetic sensors (instrumentation) installed on site. This software can provide three levels of alert, so that drones can be launched automatically - or manually from cloud access - to the locations that generated the alarm and then perform live and secure inspections for remotely located experts connected to the cloud platform.

The system is always ready to respond to emergency missions, since the robotic shelter is able to automatically recharge the drone's batteries, communicate with the dam monitoring center to update the plans flight, as well as to receive trigger signals from the drone missions.

The system transmits real-time video information, in addition to drone telemetry, to the company's control and monitoring centers, as well as civil defense if desired, contributing to more effective actions in the first minutes of the Dam's Emergency Action Plan.

It can customize the voice commands according to each risk zone in order to guide residents to follow the meeting points.

Performs video monitoring of the dam at the location that originated the alert (characterization flight).

It alerts and guides the population to proceed to their respective meeting points using voice commands and sirens on the drone. Each drone serves its respective risk zones.
It alerts and selectively guides residents in more remote areas, in places wh ere cellular or fixed telephony is absent or has limited quality and effectiveness, among other reasons.
It provides video and real-time observation of the emergency plan action, in the first minutes, from the aerial perspective provided by the drones.
Applies data analytics to identify people, animals and vehicles during the action of the emergency plan in the first 20 to 30 critical minutes. Use of RGB cameras with optical zoom and thermal cameras.
Directs drones to the affected risk zones, even if they are pre-programmed to initially serve other risk zones.
Scalable solution for rapid response in emergencies and for monitoring the dam through periodic inspections (daily or weekly).
Applies artificial intelligence to images obtained by drones, and algorithms for generating interactive reports that contribute to decision making, reducing costs in routine inspections, reducing risks related to working at height, reducing time in analysis and generating reports , greater coverage area for visual inspection. The most critical anomalies are geo-referenced for the drone's rapid response missions to monitor the dam during emergency action.

There are a few competitors (around 5) in the world with tele-robotics drone base stations.
For dam fast response to alert population, most mining companies have fixed towers of sirens spread around the dam. But end customers are looking for alternatives, as past incidents showed that many sirens failed and didn´t work when needed.

We create the shelter systems not the robots and the digital services and interface with the clients.
We use professional off-the-shelf drones that that are automated by H3 Dynamics.
Such drones can operate with a broad range of sensors that can be used for several applications and markets or provide several solutions for one specific market, such as the dams.
A global cross-company teaming approach fills gaps and open GTM.
For example: for Live Streaming / Videoconferencing (Avaya and Cisco), for IoT and workflow automation (Oracle and SAP), for Enterprise Cloud (SAP, Oracle and Schneider Electric), for Cyber Security (Cisco and HP Enterprise), for Edge Computing (HP Enterprise), for machine learning and computing (H3ZOOM.AI, Dahua and NEC), for UTM Programs (Thales).
H3 Dynamics can produce by contractors the tele-robotics drone base stations in Brazil.

In terms of value, if we attend 20%(120) of the high and medium risk dams in Brazil, with an average of three DBX drone base stations for each dam, with monthly average payment of 15,000 USD each, the revenue would be of around 64,800.000 USD per year. And we can also achieve other infrastructure markets such as solar farms, power line inspections using the same base stations.
If we provide the solution to 5% of the dams, the revenue would be near 1.5 billion of USD per year.
Our cost per base station is $ 60-90,000, including the drone. It may vary depending on sensors and drone model. The production in Brazil can reduce the cost. Currently, the tele-robotics drone base station is produced in Singapore.

AUTONOMOUS TELE-ROBOTICS INSIGHTS AS A SERVICE BUSINESS
Hardware and Software as a service.
Sales done through engineering companies or directly to end customers. B2B and B2G.

This startup battle is more focused on the dam market in Brazil as a first market with later expansion to other countries. So the investment necessary is up to 1 million USD. But H3 Dynamics is in the process of closing its ongoing $16M in Series B financing round led by MiraiCreation Fund (SPARX / SMBC / Toyota) out of Japan • Existing Series A investors including ACA and Capital Management Group have joined the round. Series B valuation is 60 million USD. For more details, I recommend to get in touch with our CEO Taras Wankewycz www.h3dynamics.com taras@h3dynamics.com

There are other competitors that may wish to enter on this dam market (among other markets), although their drones are limited in applications at the moment (sensors).
There is the drone regulation that may have impact during the entry market, but in Brazil for emergency purposes it has more flexibility to operate at the most critical mode, the BVLOS (beyond visual line of sight). But the drone can be approved through a process at aviation agency in Brazil.

Won the competition and other awards

In Brazil we have not participated yet. But our headquarters has won some competitions or received awards such as BuiltWorldAsia in 2018, and the Asia Top 100 (Echelon) in Singapore in June 2019. 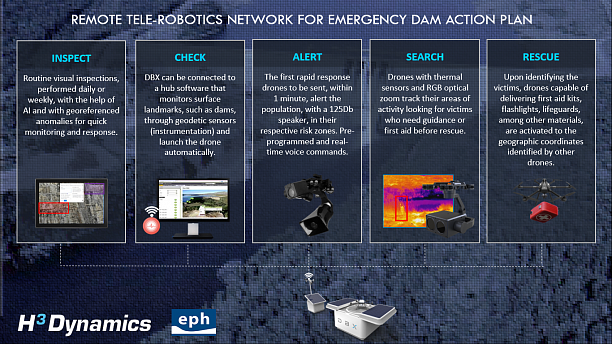 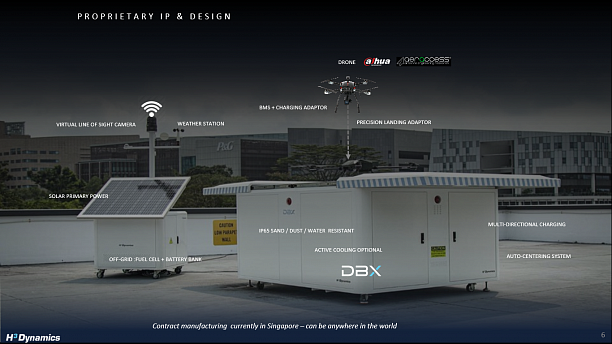 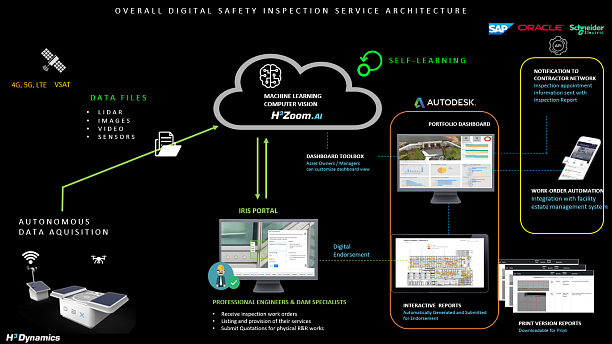