Ecosystem of Success: 5 Reasons to Invest in Silicon Valley

Startup.NetworkNews & articlesEcosystem of Success: 5 Reasons to Invest in Silicon Valley

There are dozens of startup ecosystems in the world, but it is Silicon Valley where the process of turning startups into billion-dollar companies shows the best results.

Probably, there is no person willing to invest in the high fashion industry in Kabul or Manila. Surely there you can find a handful of consumers or a few inspirational ideas, but why would anyone need all those worries and risks when there is Paris or Milan - the internationally recognized principal cities of fashion design. A similar situation has developed in the  innovation technologies community- the USA sets high standards that the whole world is trying to meet.

In 2019, the United States leadership in the field of artificial intelligence, robotics, information technologies and other fields is hardly threatened by anything, which means that anyone who wants to capitalize on the explosive growth of innovations can invest in relevant companies from the United States, luckily the country is open for investments. The question remains – there are more than 30 ecosystems of startups in the United States, i.e.: New York, Los Angeles, Chicago, Boston - which one to choose? We have at least 5 reasons to invest in Silicon Valley rather than anywhere else.

Entrepreneurs around here attract money at the early stages of the development of their projects, when their own money and resources of family and friends are no longer enough, the idea requires development, and the banks, of course, are not interested in it. Business angels (there are 1974 of them in the Valley) come to the rescue providing funds. On average, startups manage to attract more than 700 thousand dollars each. The total transaction volume on early financing amounted to 11.7 billion dollars over 2.5 years term. For comparison - a similar average for the world largest startup ecosystems is only 837 million.

All is well with funding in the Valley

2. Most startups over a billion dollars’ worth appear in Silicon Valley

Silicon Valley is the world champion in growing unicorn companies - startups with a capitalization over 1 billion dollars. From 2010 to 2018, 89 unicorns appeared here. It is more than half of the total US number and as much as in all of China. From January to May 2019 alone, 20 unicorn startups appeared in the San Francisco Bay Area, which also includes Silicon Valley. It takes an average of 6,7 years to get into the “billionaire league”. 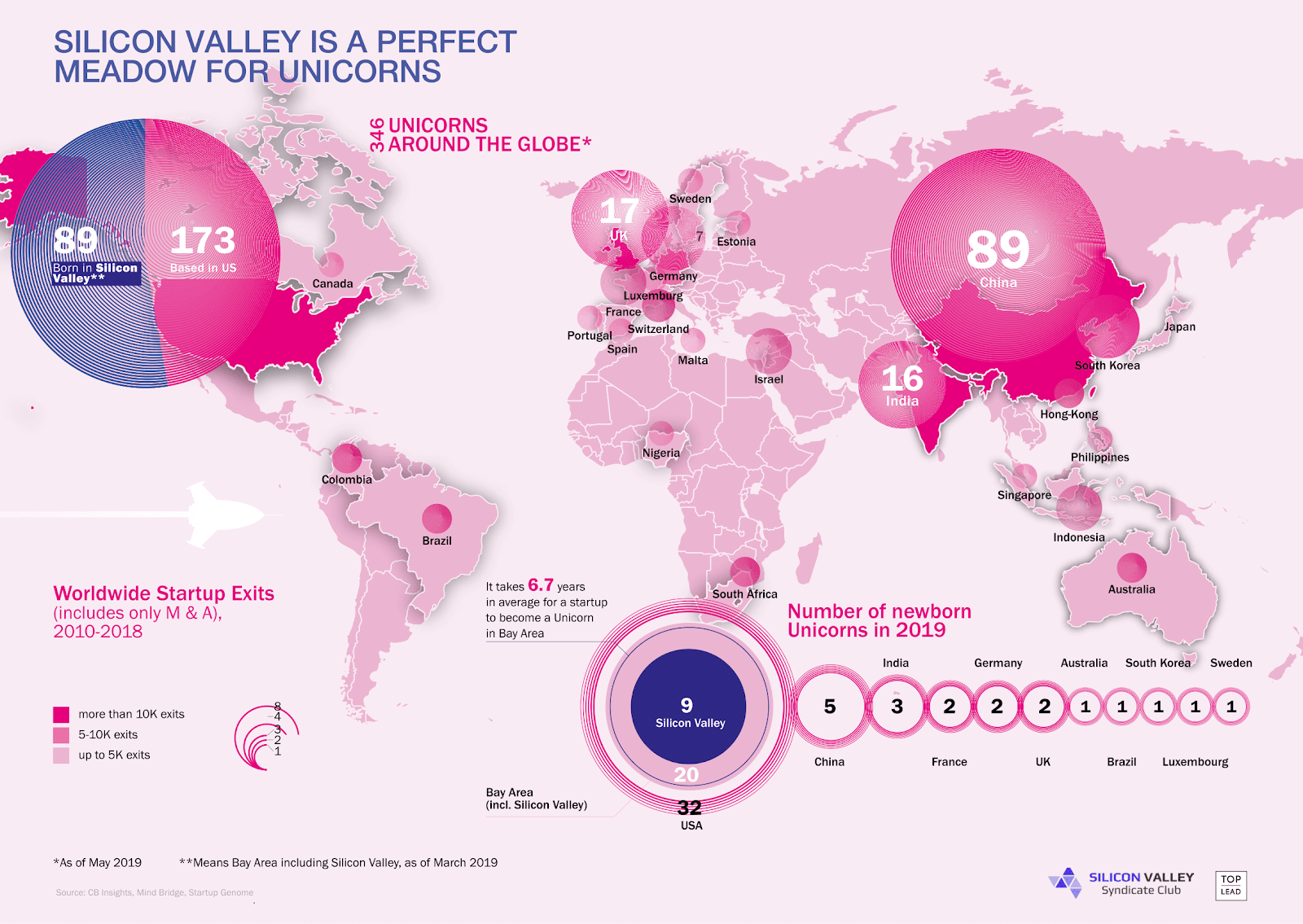 Where unicorns are born

Large investment funds do not spare money on ambitious ideas; from 2014 to 2018, the Valley concluded 158 transactions worth more than $ 100 million each, during same time period Beijing had 128 such transactions, London – 19 and Paris – 5.

3. Competence and expertise from around the world are concentrated here.

Innovative industries employ over half a million of the Valley inhabitants with various national backgrounds. Los Angeles or New York possess much less people employed in high technologies  - an average about 10% of the total employed population, but in Silicon Valley, every fourth person works in an innovative company. They are Californians, and residents of other US states, immigrants from India, China, Europe, and other regions of the Globe. Many immigrants have made outstanding progress and become the driving force behind the Valley’s technology leadership, such as Pierre Omidyar from eBay, Sergey Brin from Google, or Elon Musk from Tesla. 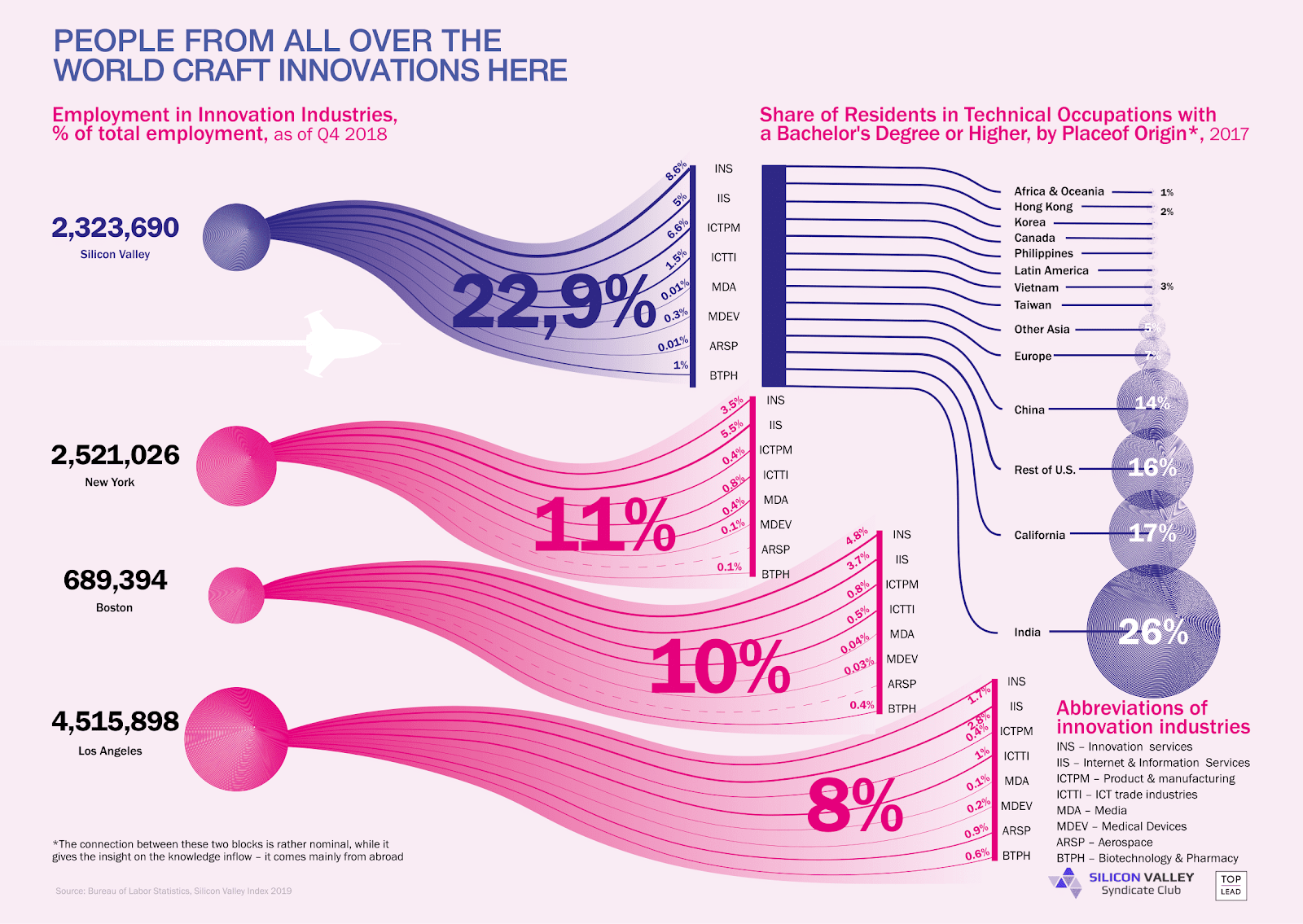 Most innovation workers are located in Silicon Valley (USA)

4. Companies shaping the global technological landscape are the Valley residents

There are many companies in Silicon Valley that earn millions, and sometimes billions, for their shareholders. While the accumulation of profitable companies is not unusual, the concentration of companies that have a huge impact on the markets and even make them – it is a unique phenomenon. 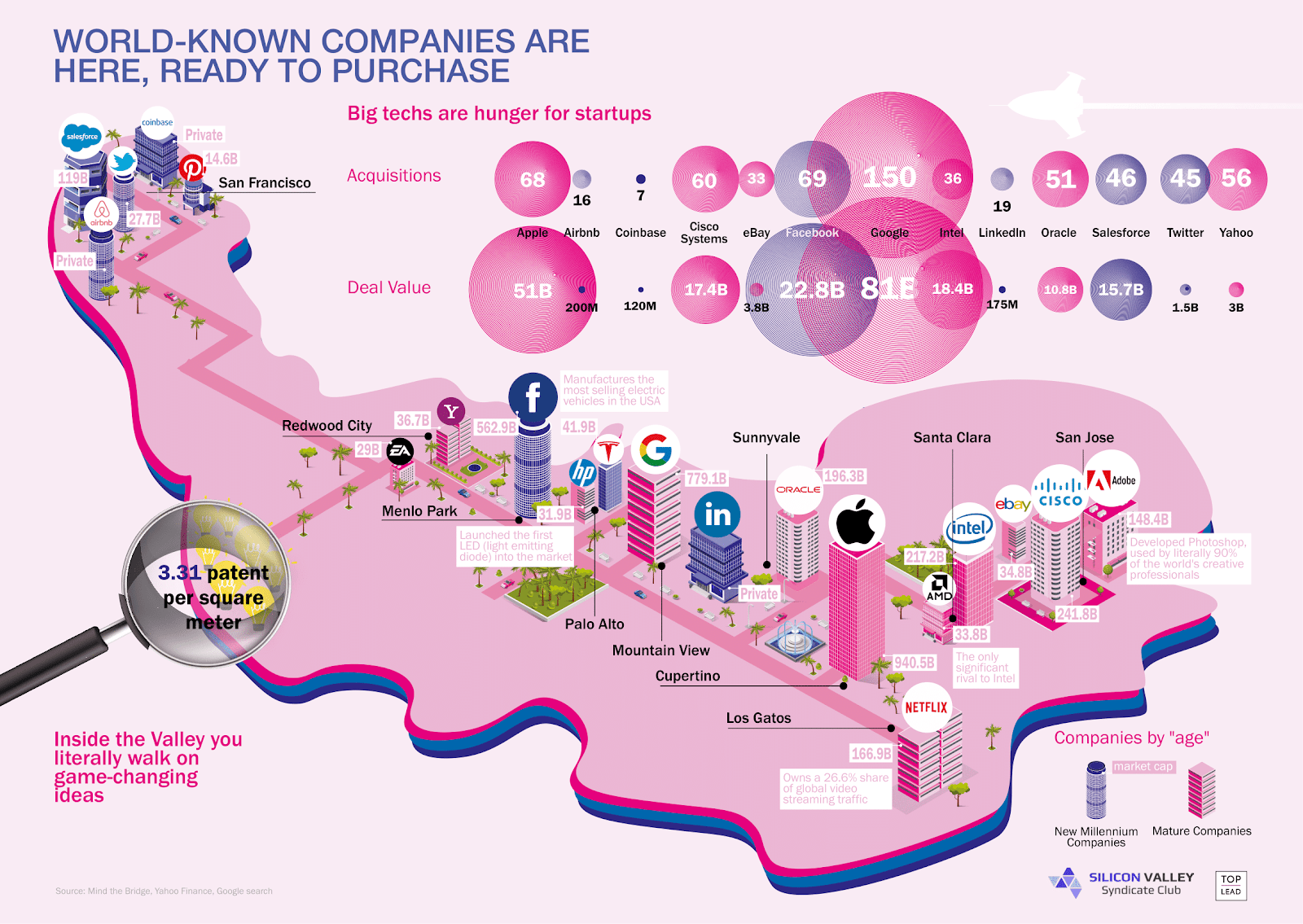 Tesla Motors impressed the car market with its electric cars so much that the auto giant Daimler AG entered into a strategic partnership with the American manufacturer and bought a stock of shares. There are other examples of the decisive influence of companies from the Valley on world markets - Facebook created and successfully monetized social networks, Google - commercialized the search for information. Apple, Intel, Netflix and many other corporations are ready to buy ideas, specialists and startups in order to transform markets, creating new products and ruining the business of companies in the traditional economy that seemed unshakable.

5. Residents of the Valley have formed a cultural environment conducive to innovation and success.

A peculiar microclimate has developed in the Valley - here you can see the homeless on the steps of the company's office worth hundreds of billions of dollars, and engineers and venture capitalists communicate in bean-wagons. The synergy of people, their habits and ideas gave rise to the cultural phenomenon of the Valley, which filmmakers did not ignore. In their opinion, the American dream is not only about the actors who conquered Hollywood, but also about the programmers who have achieved success in Silicon Valley. Stories about success in the Valley are not groundless - out of 1585 startups based in the Valley in 2014-2019, 5.6% reached more than a billion dollars - this is the highest figure in the world. 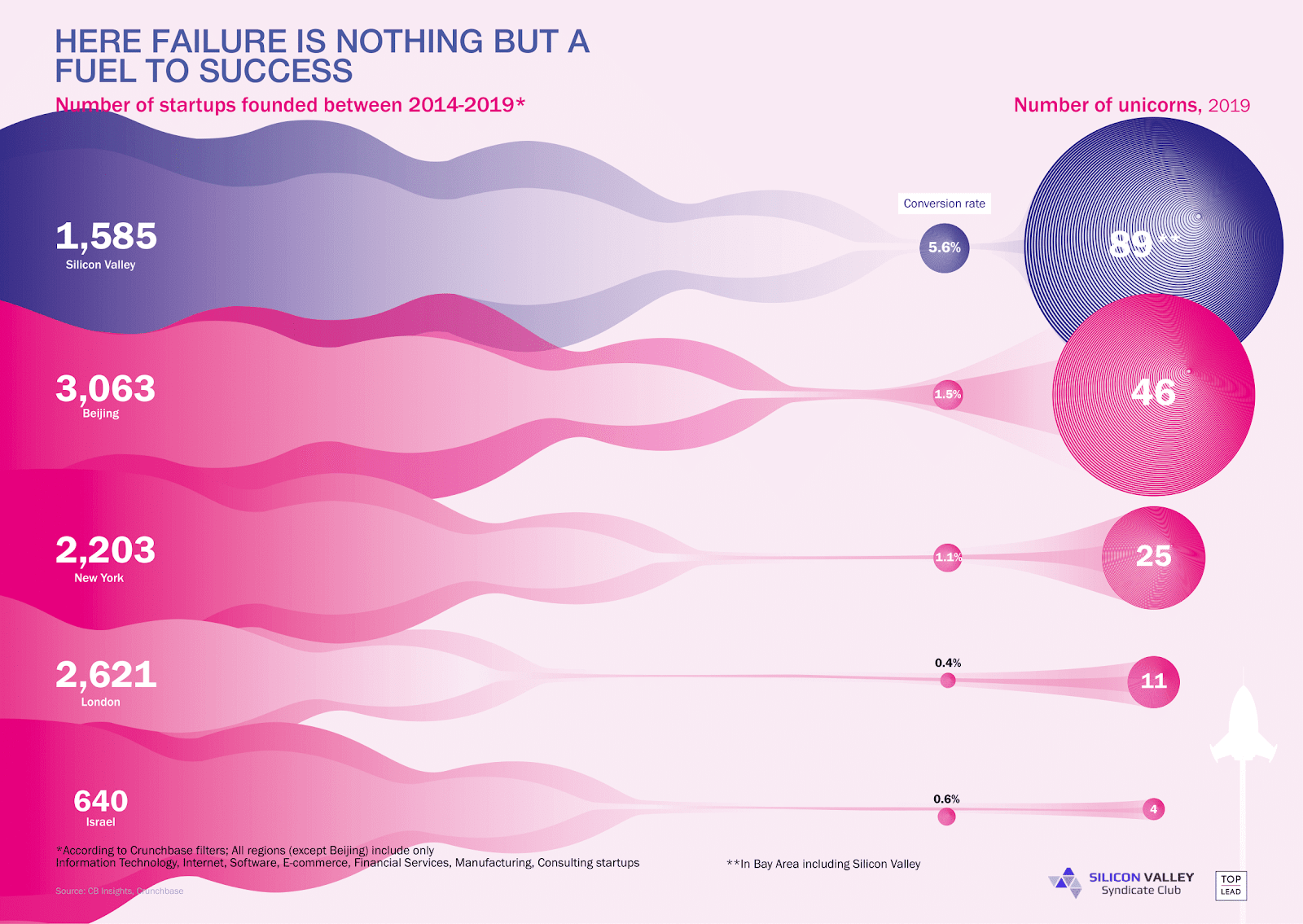 Startup is more likely to become a unicorn in the Valley

The combination of the factors described above shapes a one of a kind Silicon Valley startup ecosystem. The Valley is a conveyor that turns ideas into working companies, startup owners into millionaires, and the most successful of them into billionaires. The Valley is a brand associated with success, encouraging talented people from all over the world to join the largest innovative companies on the planet or compete with them. Here not only outstanding engineers and entrepreneurs are hunted for, but investors who are ready to invest several dozens of thousands of dollars and, thus, join the technological hub No. 1 in the world.

You need to login